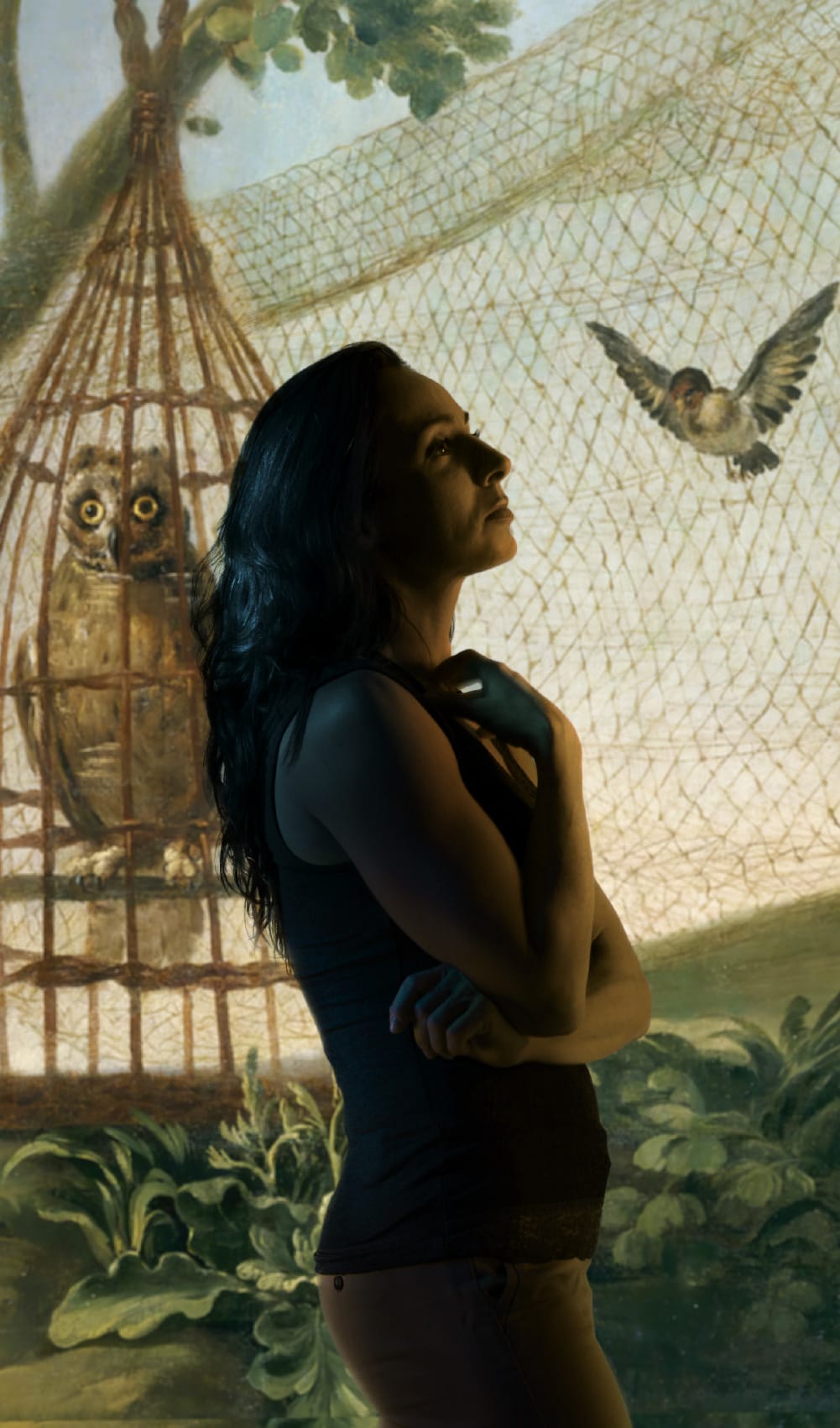 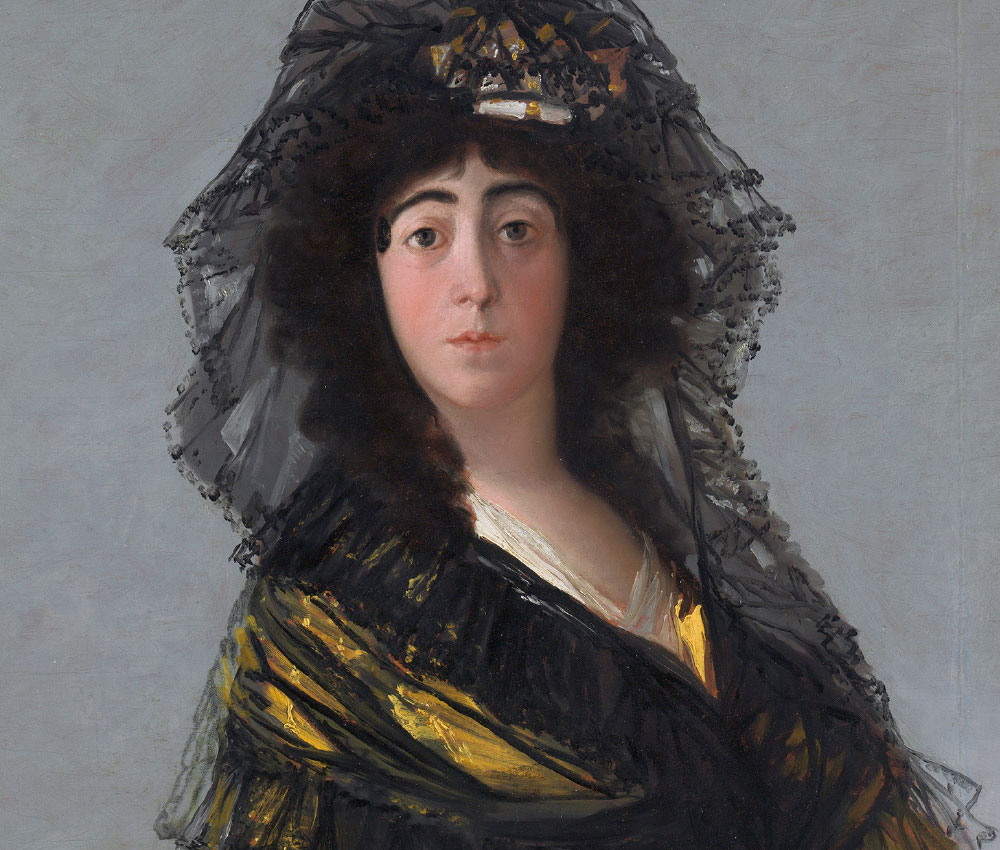 The Duchess of Alba

María del Pilar Teresa Cayetana de Silva was, along with many other titles, the 13th duchess of Alba, one of the most important noble titles in Spain, and one that was over five hundred years old. She was the only daughter of the marriage of Francisco de Paula de Silva Álvarez de Toledo, duke of Huéscar, and María Ana de Silva, duchess of Arcos. María Teresa’s father died when she was eight years old, and thus she inherited the dukedom of Alba directly from her grandfather.

Ever since she was very young, she stood out for her beauty, heightened by her long, dark, curly hair and her affable, jovial character, which made her a muse for artists, playwrights, poets, and other admirers. At the same time, she had staunch enemies, such as the queen, María Luisa de Parma, or the minister, Manuel Godoy, who were probably jealous of the duchess’ popularity.

Goya painted her for the first time in 1795, when María Teresa was 33 years old, dressed in a flattering dress of white muslin cinched at the waist with a broad red ribbon, a look that was immediately imitated by numerous ladies of high society. In the portrait, the duchess points towards the ground, where there is a small dog, also white and adorned with a red ribbon, and the artist’s signature, which says: “To the duchess of Alba. Francisco de Goya 1795”, as if it were traced in the sand. The location of the signature in the lowest area, the ground, which furthermore is the same space that the dog occupies, has been interpreted as a sign of submission, fidelity, and loyalty of the painter to his patron, ideas that the painter had already included, with different means, in previous portraits, like that of the count of Floridablanca, or the family of the Infante don Luis in the previous decade.

Apart from the duchess’ portrait, that same year Goya painted her husband, the duke of Alba, also in full-length although elegantly leaning against a piece of furniture with sheet music from the composer Haydn in his hand, as well as the portrait of the duke’s mother, the dowager marchioness of Villafranca, an extraordinary example of Goya’s ability to capture the psychology of his models. Also, from around this time are two small paintings in which the painter captured various everyday scenes of the life of the family.

Two years later, in 1797, Goya painted the duchess of Alba’s portrait again, now a dowager. Again, he showed her full-length, standing in front of a landscape in the background in allusion to her numerous possessions, but wearing a black maja-style dress. The red color stands out on the dress again in the sash that is tied around her waist, while, in this case, her long hair is covered with a mantilla, also black. The sleeves and adornments on the skirt are extraordinary examples of the liberty and precision of the artist’s brushwork. As in the earlier portrait, it is conceived as an homage to the beauty, grace, and noble lineage of the lady in which Goya compares himself with his brushes to the poets who sang to her with their verses. In this occasion, the inscription on the ground that she points out reads: “Only Goya”, a phrase which has been understood as a sign of a romantic relationship between the model and the painter, instead of being seen as a show of artistic loyalty of the duchess to Goya, corresponding to that which the artist had shown in the portrait with the white dress.

The legend of the romantic relationship between the duchess and Goya was forged in the first decades of the 20th century, and has caused much ink to be spilled, it has inspired novels and film, adding confusion to a story which has no reliable basis. Different references, such as Goya’s own testimony in a letter to his friend Martín Zapater, in which he says that the duchess went to his studio for him to apply makeup to her face, a task which he enjoyed more than painting on canvas, undoubtedly reveal a closeness between the two figures, but that does not mean it had to be a sentimental relationship, something that would have been impossible in a class-conscious, highly inegalitarian society as it was in that time, in which the artist was an salaried employee working for a client who, furthermore, belonged to the highest rank of the aristocratic class.

On the other hand, the duchess of Alba was very close to a great number of people. She was renowned and loved for her friendliness, generosity, and simple manners with friends and employees, many of whom she included in her will as she did not have a direct descendant to whom she could leave her belongings, as she never had children.

Goya only painted the duchess one more time, for her burial monument, after her death in 1802.